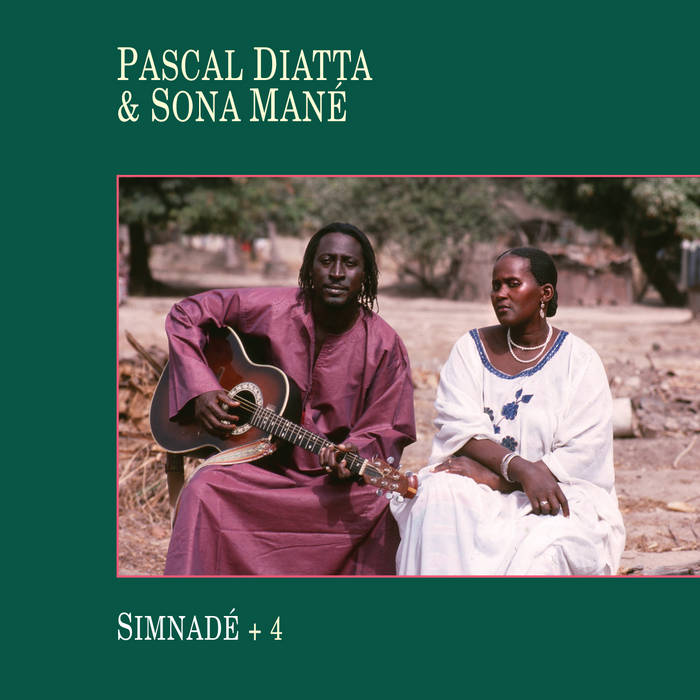 Pascal Diatta, who passed away in 2017, was a totally original guitarist of stunning virtuosity, truly one of Africa’s great acoustic players. He was of the Balanta people who are found mostly in Casamance and Guinea-Bissau, and an elusive figure, travelling widely in the region to scratch a living from playing music.

In 1988, Rogue Records’ Ian Anderson travelled to Casamance, Southern Senegal, packing a Pro-Walkman and a pair of microphones “just in case”… He was lucky enough to be able to locate and record this legendary local figure and his wife, singer Sona Mané. The fascinating story of the trip became a cover feature in Folk Roots magazine (later adapted to become sleeve notes, updated and included with this digital release).

Simnadé first came out in 1989 on vinyl and cassette, and later on CD in 1992 with all the original album plus the remaining four tracks from the session that were only missing the first time around because of playing time restrictions on vinyl. None of the formats have been available for a quarter of a century.

“Mané’s passionate, husky voice stuns and enchants, sending shivers down the spine. But it is Diatta’s amazing finger-picking stop/start guitar that really takes the breath away, providing looping and spiralling patterns over and under the swooping and soaring voices. This is utterly extraordinary music” (**** Q Magazine review).

“Simnadé is a stunning debut album. Pascal Diatta’s unique guitar playing provides a constant flurry of riffs, runs and notes as the driving background to the pair’s startling vocals. It seems amazing that people of such ability and originality, with real power to move audiences from any culture, have gone unrecorded for so long.” (The Catalogue)

“Jackpot! The chance to hear this record was an incredible joy. He sounds like a strange blend of Ry Cooder, merengue and too-fast ragtime picking. The close harmony of the voices tied tightly to the guitar lines make for a striking and different sounding music.” (CMJ New Music Report)

Read the story at www.ianaanderson.com/pascal-diatta-and-sona-mane/