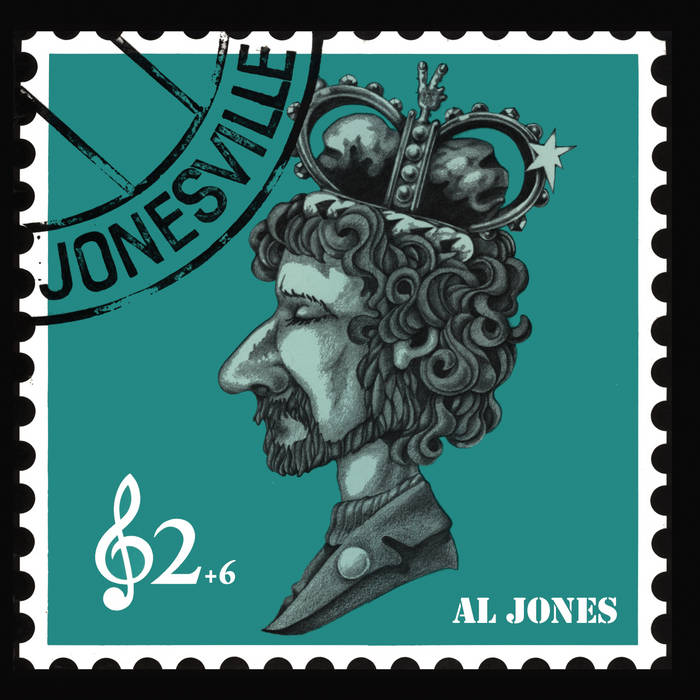 Born in Saffron Walden, Al Jones pitched up in Bristol in 1966, bearing a 12-string guitar and an uncanny ability to play it in an original way, forged from the so-called ‘contemporary folk’ of the day, country blues and an unashamed fascination with the pop songs of the preceding decade. It coincided with a big boom in folk and blues in the area and by the autumn of that year he’d joined together with Ian A Anderson and Elliot Jackson in a trio who played the opening night of the about-to-be-renowned Bristol Troubadour Club, were soon voted Bristol’s most popular folk blues group, and released a now very rare EP.

The Bristol Troubadour was the other end of a pipeline connected to London’s legendary Les Cousins and pretty soon there was a two-way traffic between the clubs. National names like John Renbourn, who played in Bristol regularly, spotted Al, took him up to London, and soon he was a popular performer in both venues, on his way to national recognition.

By then Al was playing regular 6-string as well, and writing ear-catching songs, often as lyrically unconventional as his playing. He soon got signed to make his debut album which came out in 1970 on EMI’s Parlophone label. It wasn’t a happy experience for Al, though, and it suffered something of a critical mauling. Sounds described it as “a model album – a model in how to make every mistake going, principally by drowning the artist at all costs (or rather the minimum cost).” To be fair, it sounded better (as does most vinyl of that era) when eventually re-mastered for CD years later, and you can’t disguise a good song, but the damage was done.

Al retired hurt, retreating to Cornwall and taking up a part time job as a coastguard. The sea became a fascination – as reflected in a number of his later songs – but so did an earlier interest in electronics. He started recording an album for Bill Leader’s Trailer label but never completed it.

The world and especially his musician friends weren’t going to let him go that easily, though, and occasional gig offers still came in from mainland Europe as well as sporadically in the UK, to prise him out onto the road – where he tended to get a little wild! So the songs kept getting written and he was able to road test the first of his devices, a box of tricks to process the sound of a guitar, dubbed ‘The Reverser’ (which pretty much did what it didn’t say on the plain aluminium box: reversed the natural decay of an instrument’s note).

His old Bristol friend Ian Anderson had also suffered the indignities of major labels in 1969 and as a result had founded the now very collectable cottage industry label Village Thing, which released a couple of dozen albums in the early ’70s. Eventually Ian twisted Al’s arm and coaxed him back into recording in 1973, but this time it was VT’s informal, improvised set-up in a Quaker Meeting House on the outskirts of the city. Here, with simple equipment and a small number of sympathetic local musicians (the drummer was encased in a hut made of mattresses in the hall to cut down sound spillage!) he had all the time he wanted to experiment and overdub himself by bouncing from one stereo Revox to another. Al created Jonesville, a lo-fi psych folk classic.

The following year, he recorded a further set of demos which never saw the light of day, so we’re pleased to expand the original album with six of those.

In recent times, many of the records put out by Village Thing have been included under that later banner of ‘psych folk’ – not a term that existed in those days. But if it had done, then Jonesville and the songs that followed it, with their subtle rock influences, occasionally unsettling lyrics and understated electronic tweaking of guitar sounds, deserve it more than most. From the simplicity of Time To Myself (one of the better Beatles songs they never wrote) to the urgency of Get Out Of My Car, the futuristic visions of Ice Age, Earthworks and Tell The Captain and the rhythmic pulse of tracks like Stormy Weather, all with determinedly English singing, it’s an album of intriguing breadth. And then there’s the extremely tongue-in-cheek Elvis-meets-Canned-Heat take on traditional warhorse The Wild Rover to remind you that off-the-wall humour was always an ingredient of an Al Jones gig. This time he’d at least made a record that was representative.

The satisfaction didn’t last long though. Village Thing was soon to be effectively killed off by Transatlantic Records who had taken over its manufacturing and distribution, and the mid-’70s became the lost years for songwriter/ guitarists in UK folk clubs as they polarised into traditionalist and comedian camps for most of the decade. So from then on, Al concentrated on developing the Ashworth range of acoustic instrument pickups and later the extraordinary, tiny Ashbory bass, beloved of session players and eventually manufactured by Fender. It would be 25 years before he made another album and although he later returned to a musician career on a more localised basis in Cornwall in the 21st century, he sadly died suddenly on 1st June 2008.

We’re very pleased to make this little gem available to old fans and a new audience. It deserves it.

All songs and arrangements by Al Jones except 13 traditional, arranged by Al Jones. 1-13 published by Village Thing Music; 14 – 19: MCPS/PRS.

Tracks 14-19: demos recorded by Ian Anderson at home on a TEAC cassette deck in 1974, all are previously unreleased except for 19.

Digitally mastered for CD from original tapes 2014 by Duncan Cowell at Sound Mastering.