Ghosts From The Basement 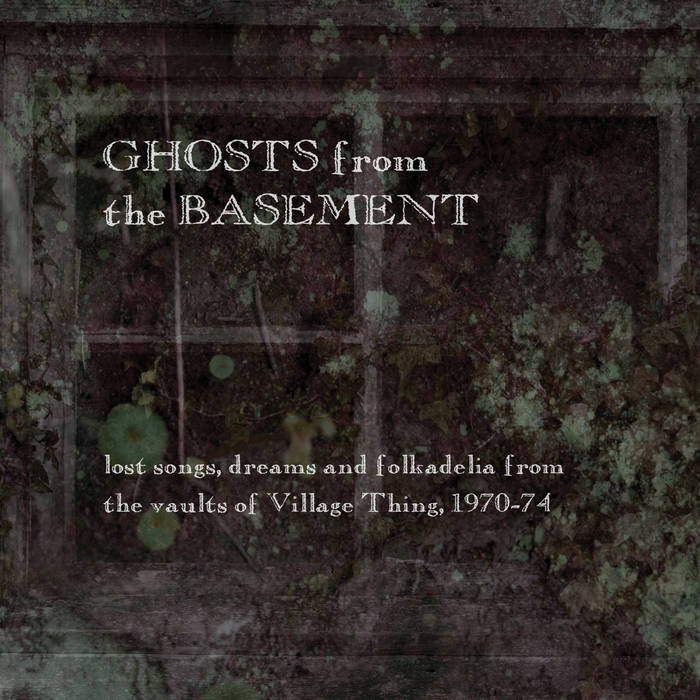 GHOSTS FROM THE BASEMENT

Lost songs, dreams and folkadelia from the vaults of Village Thing, 1970-74.

In the late 1960s and early ’70s, the contemporary folk scene in Bristol – centred on the Troubadour Club in Clifton Village, in those days a crumbling student quarter above the city centre – was the liveliest and most creative outside London, with many nationally known artists basing themselves there. Emerging from it, Village Thing Records was launched in 1970, one of the pioneering ‘cottage industry’ independent labels of the pre-punk era.

Subtitled ‘the alternative folk label’ decades ahead of the coining of ‘alt.folk’, Village Thing Records released two dozen albums and a few singles between 1970 and 1974. With immediate strong national press and radio support, the label soon prospered with its unique, hard-to-pin-down and interwoven family of established names and newcomers, original UK singer/ songwriter/ guitarists, some visiting Americans, and a sub-strand of successful folk entertainers. It was the contemporary folk scene’s complement to the more traditionally-based recordings being simultaneously released by Bill Leader’s Trailer label, and both were manufactured and distributed by the folk ‘major’ of the day, Transatlantic.

Over recent years, many of Village Thing’s releases have gained cult status amongst collectors of contemporary folk and songwriter/ guitarists, and this has accelerated as they have had the more recent labels of ‘psych-folk’ or ‘acid folk’ pinned on them – neither terms which existed in their era. Village Thing albums now often change hands for high prices.

One thing which may astonish new listeners is how extraordinarily high instrumental standards were, and how many truly original stylists existed in that era, compared with today when few rise above the basic and formulaic. Also, fans of certain better known artists from that era may well be startled by the evidence that they were merely the ones who got major label deals and perhaps a name producer. Out there in the nation’s urban basements – for in truth, few artists had the luxury of the record company funded rural idyll – were plenty of others who were just as, or in some cases more, original and talented. Village Thing had more than its share with emerging names like Dave Evans, Al Jones, Steve Tilston, Chris Thompson and Ian A. Anderson as well as already influential figures like Wizz Jones and Derroll Adams.

Ghosts From The Basement marks the 40th anniversary of the label with a fabulous, maxi-length set of tracks, some very rare and a few previously unreleased. It has been lovingly assembled from, as far as possible, original first generation masters. The CD comes with detailed reminiscences from label founder Ian Anderson (no, not that one!), lots of archive photos and shots of all the original cover artworks – all in an attractive plastic-free triple gatefold digipak.

Ghosts From The Basement was compiled and produced by Ian Anderson, 2010. Digitally remastered April 2010 by Duncan Cowell at Sound Mastering, from original master tapes where available. Exceptions are tracks 12, 18 and 19 from previously unreleased demo tapes, 9 from the vinyl album as the masters are lost, and 17 from a rare unreleased test pressing as the tape has vanished: in these cases best effort has been made to produce a decent sound from the only available sources.